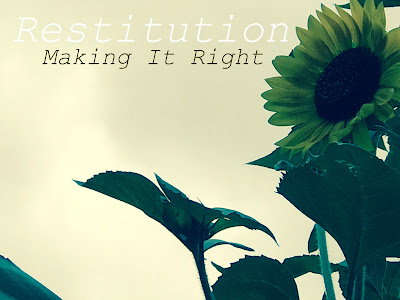 Restitution is an old word. We don’t use it much today, but we should. It’s where we have done something wrong and we take action to make it right. Like when we dent someone’s fender and we pay to have it fixed, or we break someone’s favorite bowl and we replace it.

Once when my middle son was two, he wandered into our neighbor’s yard and picked the blooms off an orchid plant to give to me as a gift. Now, if you know anything about orchids they are very temperamental, getting them to grow isn’t easy.

At the time, we lived on a small island in the Pacific, and our neighbors were a career couple who had no children. So, they were not very understanding when they got home and found a note from my husband telling them what our young son had done and asking them to come see us.

When they came over, we apologized but could tell it had done very little to straighten out the situation. The neighbor explained how hard it was to grow the orchids even in the tropical climate and how he had been waiting for years for the plant to bloom.

A few days later the wife paid me a visit to smooth things over and told me that her husband had been so mad that he had gone for a long walk before he coming over and talking with us that day.

This added to the guilt I felt. I wanted to do something, but I wasn’t sure what.

So, I prayed for guidance. The Lord in His faithfulness reminded me of this word, restitution. He pointed out scriptures like Acts 3:21(KJV) and Luke 19:8b (NIV) where Zacchaeus said, “if I have cheated anybody out of anything, I will pay back four times the amount.’” to show that His way was to make it right.

However, I didn’t think a plate of brownies or money would do the trick.  I asked the Lord to help me find an orchid, blooming to replace the one that had been taken. I knew this was a tall order since orchids were rare on the island, not a native plant. They had to be brought onto the island and cultivated.

But God is big, and God is good.

That week in our paper there was an ad for a yard sale that listed orchids. I was thrilled. I made sure to get up early the day of the sale in order to get one of the plants. Not only did I get a plant, but I got one that was blooming.

After repotting the plant and asking God to go before us, my son and I took it over.

You would have thought we had given him the moon. He thanked us several times, and by his countenance, I could tell we had touched him deeply.

Later that week, he came by to tell us how the plant was doing and that his other plant had a bloom on it too.  He invited both myself and our son to come see it.

By practicing restitution, a situation that could have led to a break in the peace we had with our neighbors was diffused and restored.

Saying you’re sorry and asking for forgiveness is always a good thing, but there are times when we need to make it right through restitution.

Challenge: Is there a situation that you need to make right through restitution either now or from the past? If so, pray and follow God’s leading. You will feel better, and you might make the other person feel better too.